I’m a little over 11 weeks so I still feel like it’s pretty early. I started feeling nauseous about 2 weeks before Thanksgiving. At first it was just a little queasiness and an aversion to food. Which sucked during Thanksgiving because I wanted to eat everything but couldn’t! But then it turned into morning sickness in the morning and at night with a few good hours in the middle of the day. Then it turned into all day sickness, vomiting, and not being able to eat or drink anything besides toast and milk.  I lost about 6 pounds in 3-4 weeks (and I don’t feel like I have much to spare to begin with) and was feeling pretty weak and dehydrated. But the good news is my doctor put me on Diclegis which is medication for women with NVP and it’s helped so much. My nausea is pretty much gone, I haven’t vomited, and I’m able to eat some fruits and veggies now in addition to my toast.

Even though the medicine is working great I still feel bad for taking it while pregnant. Part of me just feels like I should tough it out. The other part feels like it’s better to be able to eat healthy, stay hydrated and not keep losing weight. So I’m already feeling the mom guilt. Have any of you taken Diclegis or other nausea medicine while pregnant? What worked for you? I’ve tried small, bland meals throughout the day, ginger ale, ginger gum, peppermints, sour candies, nausea bands, saltines…none of it really helped.

So it’s been rougher than I expected…haha. I know pretty much everyone goes through the morning sickness thing but I guess I was hoping it wouldn’t be this bad! Wishful thinking, right? I also don’t know why people decide to have more than one child after going through this…haha. And how some women continue to work during the first trimester. I’m lucky that I’m only working on this blog right now so I was able to pretty much lay in bed/sit on the couch all day during the nausea.

Needless to say, I don’t have any new outfits to share because I’ve been living in my pj’s all day. I’m still just really tired and my day consists of trying to find things that I can eat. I’m really bummed that I haven’t been able to keep up with the blog – especially during the holiday season. I was planning on doing lots of fun holiday posts but I just couldn’t get anything done once I started feeling bad. I also feel like a bad blogger for not having one of those cute pregnancy announcement blog posts. It’s just me complaining about how sick I feel! I’m really hoping that once the 1st trimester is over I’ll start feeling like myself and I’ll be able to get back to regular posting.

I should also mention that even though I’m feeling physically crappy, I’m also feeling incredibly blessed. I know some women are really struggling with not being able to get pregnant and that’s heartbreaking. I didn’t have to go through infertility treatments and I can’t imagine the emotional and physical toll that takes on a person. Those women are definitely tougher than I am!

But I can relate a little to the feeling of wanting to have a baby and not being able to. It took me a year to convince my husband to even start trying to get pregnant. And then it took 6 months after that to actually get pregnant. It was definitely a frustrating time because I felt like I was all alone in this. I felt my biological clock ticking (I was 30 when I wanted to start trying) and I also felt a lot of rejection from my husband. It wasn’t until I turned 31 that my husband agreed to start trying. I don’t think he was 100% on board with that decision either…haha. But now that I AM pregnant my hubby is 100% supportive and excited about it. It was just a tough time getting to that spot.

ANYWAY –  sorry for the loooong post. If you managed to make it through, YOU GET A COOKIE! Not really – but I am impressed!

Now onto Flashback Fashion Fridays! Here’s a look from last December around this time. I was starting to get into my neutral/monochromatic styling. The weather is still pretty mild in December in California so I was able to show some skin. But My favorite part are these OTK boots from Zara. They are the first pair of boots I was able to find that fit my skinny chicken legs! 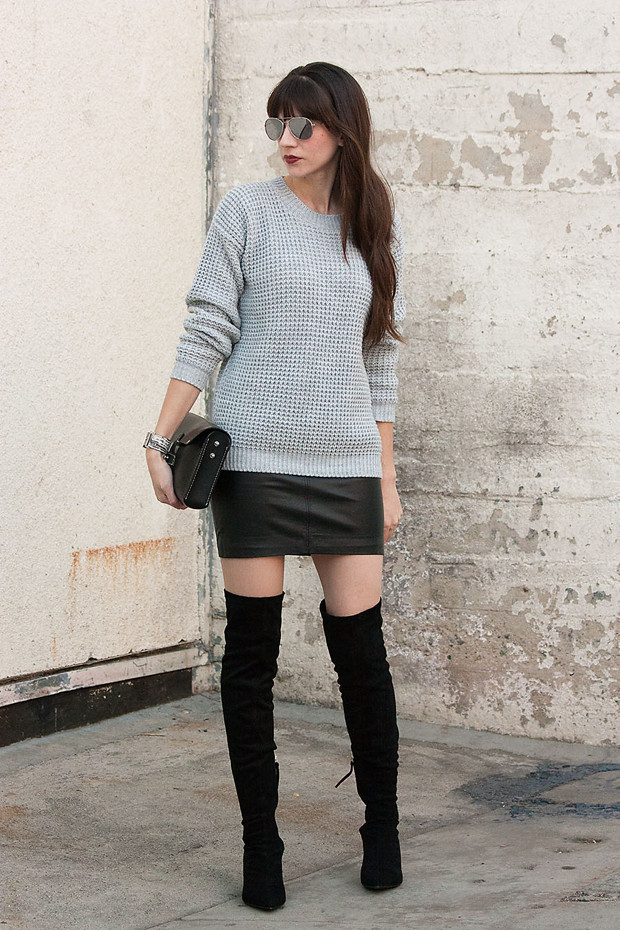