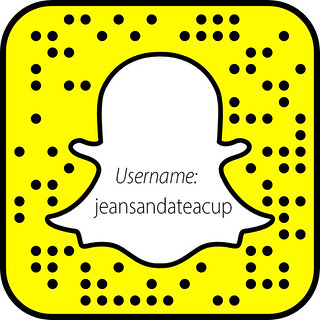 Take a picture of this icon in snapchat to automatically follow me!
Or add my name: jeansandateacup
I feel really old guys. I literally had to look up tutorials on how snapchat works. It took me about a week to figure out…haha.
I have to admit – at first I thought snapchat was really stupid. Why would I want to put time into making videos when they will just disappear? But I downloaded the app anyway just to check it out because I’ve been really curious. I followed a few people to see what kind of stuff they were posting. And then I realized that the “snaps” people post are so silly that you don’t really want them to stick around for more than 24 hours….haha.
If you are able to take snapchat for what it is then it makes a lot more sense. It’s kind of like twitter in a sense – tweets appear for a short time in people’s feeds and then they pretty much “disappear”. Unless you specifically look up a users twitter account to see all their past tweets you’ll only see their most current tweets in your feed anyway.
Things to know about snapchat:
1) Videos/pics are up to 10 seconds long and only last for 24 hours.
2) You can replay those videos as many times as you want within 24 hours.
3) There’s no follower count. You can’t see who other people are following or who follows them. You also don’t have a number count of how many followers you have – you just have to guess based on your “Added Me” section.
Ultimately, I decided to join snapchat because I feel like it will give people the chance to get to know me a little bit better. On the blog I don’t share a lot of personal info on what goes on in my life. I feel like I want the blog to be focused on fashion and not necessarily day-to-day stuff. So I’m going to give snapchat a try and see if I can add a little personality in there!
So now I need some friends! Let me know if you have snapchat and leave your username so I can follow!
P.S. Let me know if scanning the pic above to add me doesn’t work! I’m still trying to figure this whole thing out 😉