Sooo it’s been a minute since I’ve given a home renovation update (You can read the first update here)! It was around this time last year that we had driven from LA to Pennsylvania to start our big move back to the east coast. My husband had just left for a 4 month job in Greece and the kids and I were living with parents while he was away! Whew! It was kind of a crazy time.

We weren’t able to actually start renovations until October 2021. The first order of business was to remove the huge arches that were interrupting the spaces. We also tore out all the cabinets in the kitchen to get ready to put down new engineered hardwood floors.

Soooo…we had a little problem with asbestos along the way. As you can see, there were square linoleum tiles throughout the whole house (even under the carpet). We were a little worried that they were asbestos tiles because they looked like asbestos tiles. However, the contractor didn’t think it was and he said it was fine if they were removed during the renovations. We didn’t really think anything of it until AFTER the tiles were removed in the kitchen. We had the flooring contractor come through and he mentioned that they were probably asbestos. So we decided to get them tested. Turns out, they ARE asbestos tiles. And unfortunately, the tiles in the kitchen were removed without proper precautions – meaning, the rest of the house could be contaminated with asbestos spores.

Now we had a big problem. We had to hire an asbestos removal team to come and test the air to make sure it wasn’t contaminated. Thankfully, they said the air in the house was fine. Then we had to have the asbestos team come and remove ALL the tile in the house properly. This wasn’t originally part of our reno plan so it was an added expense.

Moral of the story – don’t just trust the contractors. If you think something is up, it’s a good idea to get it checked out. If it looks like asbestos tile – it probably is…haha.

In the end it worked out in my favor. I had always wanted to remove all the old flooring/carpet and put in wood floors. Originally, we were just going to do the kitchen and dining room and then do the rest of the house later to save a little money. So I’m happy with how it turned out!

The next step was to put in flooring! I was originally looking at LVP options because of the price point. However, I was having the hardest time finding an option I liked. Nothing was quite right. I ended up going to the Carpet and Tile Mart and finding an Engineered Hardwood option that was PERFECT. And since I was at the Carpet and Tile Warehouse, the price for the engineered hardwood was the same as the LVP options I was looking at at the other stores.

Things never go as planned in home renovations, do they?? I had ordered the flooring about a month before it was going to be installed. We had to wait until December 20th to get them installed because everyone is busy! So on the 20th the flooring was ready to be installed and everything looked good! That is, until I realized that they hadn’t measured for the LIVING ROOM and didn’t have enough wood to cover that area.

The living room is RIGHT IN THE MIDDLE OF THE HOUSE so it was a HUGE deal that they didn’t have the wood to cover that area. For some reason, even though the flooring guy came out to the house TWICE to measure, he still forget to measure the living room. And yes, I told him many times all the areas of the house where we needed flooring. I don’t know how the miscommunication happened.

Anyway, long story short – they were able to get the additional flooring ASAP so the floors were finished a day or two before Christmas – HALLELUJAH!

Moral of the story – ALWAYS double check contractor measurements. I should have measured the rooms myself and double checked those measurements with what the contractor had. But ya know – I just trusted the professionals to do their job correctly.

Before the flooring went in we actually were able to paint the walls. The original wall paint was pretty dirty. And a lot of the walls were various candy color shades – light blue, light green, light pink, light purple, light yellow…not exactly my style. So I wanted to just paint everything white to start off with a clean canvas.

But who knew choosing a white pain color could be so difficult?! I wanted a white that was warm an inviting but had no idea where to start. I eventually found a couple options from searching popular paint colors online. I narrowed it down to Benjamin Moore’s Simply White, White Dove, and Swiss Coffee.

Simply White ended up being too white and Swiss Coffee initially looked too yellow. So I was really leaning towards White Dove. But after painting some swatches on a couple of different walls I actually ended up liking Swiss Coffee more! So after MUCH deliberation I decided to paint all the walls in Swiss Coffee.

I do really like this choice. On some walls during different parts of the day it looks like a true white. And other times it looks nice and warm. I can’t tell that it’s an off white color unless I have a true white up against it. And since the style of our home is very vintage-inspired, I think the warmer white goes well with the decor. If I had a more modern style I would probably go with White Dove since it seems to be a very versatile white and one that a lot of designer experts use in their homes.

Next I’ll be sharing before and afters of the rooms we’ve put together so far! 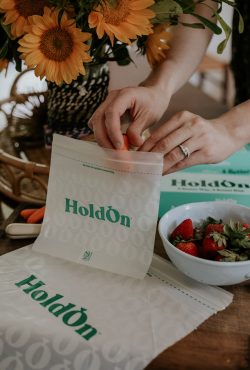 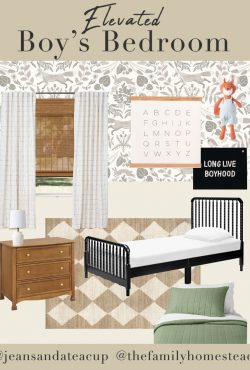 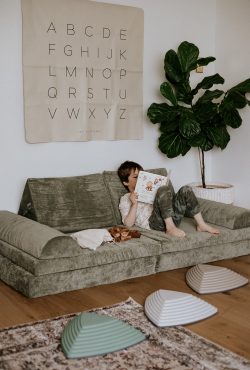